Here's a look at the top 50 finishers. Kip was 45th overall. Kip took 6:01 to cross the starting line. Every single finisher except Rose Kosgei and Kip Litton have a 10Mile split.

http://onlineraceresults.com/race/view_race.php?race_id=9880&submit_action=select_result&re_NO=7223
Posted by Study of K.Litton Running at 11:39 AM No comments:

Some e-mail correspondence with the head of the Cystic Fibrosis Foundation (CF) and with the man (Dr. Litton) himself, dating back to January, 2011:

"I want to get to some ice cream & baseball tonite so will close out w/a thanks to SOKLR, Kyle Strode, Mike McGrath and all the fantastic LR sleuths who outdid themselves in digging up damning stuff on you-know-who. I really wanted no part of a story and tried twice to end his deceit - but our boy rallied even after I got him to take down his WWR site to make more crap up and cheat in that Dec '10 NC marathon.
Correspondence w/the MI head of CF, Cathy Zell of 1/20/11:

'Thank you for your email. We appreciate your concern but please rest assured that the only web page that was available to accept donations related to Kip Litton's fundraising belonged to the Cystic Fibrosis Foundation. As such, any donations contributed in support of Mr Litton would have been received directly by the CF Foundation. To our knowledge, Mr Litton has not received any donations intended for the CF Foundation directly. The CF Foundation takes the public trust bestowed upon it by the CF community very seriously and we appreciate the concern you have shown in reporting this matter.'
Lastly, this from me to my Clarkson/Davison buddy [Dr. Kip Litton] from 1/12/11:
'My friend, as this tale has continued to unravel, the circumstantial evidence is piling up and, frankly, is so deep I dont' think there's a way for you to dig your way out. However, my offer for you to be monitored in races still holds. At this point however, I don't see how the races you run will escape the sharp eyes of the mass of people watching/following your every step - regardless of how discreet I try to keep up my end of the bargain. Don't get me wrong, getting monitored in races is probably the only way you can save face. Saving face would help but won't make your trail of deceit disappear.
'At some point, independent of me, somebody may contact you to do a story. At some point, you'll be quizzed pointedly about wildly uneven splits, missing photos, mid-race changes of clothes, fabricating races, etc. Somebody's going to call you out.
'I'm going to toss something out: I see the noose around your neck tightening. I don't see how you can avoid a story that'll cast you out as part of the wildest matter of sports deceit in many a year. Unless you can come up w/plausible, clear, factual explanations for all these alleged sub 3 marathons. Allowing that that won't happen, my idea: come clean. Let the truth set you free. I don't thnk you want to go through the public hell of a story detailing your long trail of chicanery. A story might appear anyway but if you come clean first, it'd have the effect of mitigating the fallout. I'm not saying you should do this - offering it as an option.'
As we know, Dr D Kip Litton did not come clean, denying culpability to the end and somebody did write a story. I wish the man no ill will & hope his son w/CF can lead a productive life. Too bad it all had to come to this...

Dang it all - forgot to thank Mark Singer for contacting me in Apr '11, indicating interest in writing about Kip. He did a terrific job of it! The thought of writing about Kip made me feel uneasy. I like to have fun w/topics & Kip was no fun.

Be good everybody and keep that training between the navigational beacons!"
Read more: http://www.letsrun.com/forum/flat_read.php?thread=3863010&page=239#ixzz23caJrGhd
Posted by Study of K.Litton Running at 8:32 PM No comments:

Spotted this tweet the other day from Pat Price at WritingAboutRunning.com:

Posted by Study of K.Litton Running at 5:00 PM No comments:

Parody T-shirt design for the race that was never run. 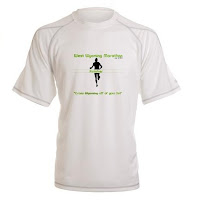 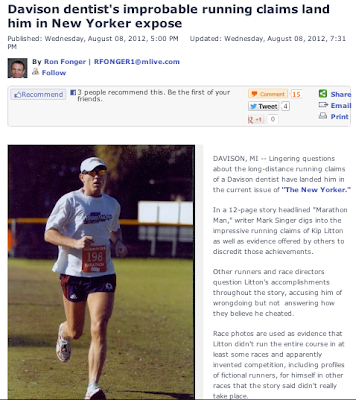 Check the comments section. Here are some screenshots:

Posted by Study of K.Litton Running at 12:37 PM No comments:

"The blog Study of Kip Litton Running Performances was integral to Singer's research and contains a day's worth of reading on the topic of whether Litton is a serial cheater." - http://news.runnersworld.com/2012/07/30/new-yorker-on-accused-cheater-kip-litton/

Kip Litton article in a national magazine shortly. When will it be out?

What do you think Kip Litton will do at Boston 2012?

1. Large differences between net time and gun/clock time(sometimes even greater than the last place finishers)
2. Race photographers' pictures of Dr. Litton are usually all close to the finish line with none at other points along the course where other runners appear
3. Unusual pace changes between course checkpoints/timing mats
4. Other runners he finishes near do not recall seeing him
5. different outfits: e.g. @ Cox Providence Marathon a different pair of shoes...@Shamrock coat and pants came off...@Boston pants off, new cap

"This issue of Kip somehow 'plowing' through vast fields of entrants after starting with a delay has been in the backround throughout the discussion. Thanks for pointing out just how absurd this concept is. Certainly the 'flag'for his deceptive ways has been his gun/chip differential. Unless the guy has powers of levitation, some/most of his supposed racing feats are not humanly possible, no matter of his fitness."

walking during 17:33 5K at Gasparilla